The morning for the girls was rough; those who did not have breakfast duty spent the morning in a continuous habit of waking up and falling back asleep. The boys spent their morning faced with a bracing cold when they got out of their cabin. Soon those who were not required to cook breakfast for the group managed to stumble out of bed and were greeted with the lovely sight of pancakes (courtesy of team Beeloggers). The pancakes were the delicious flavors of banana, apple cinnamon, or chocolate along with a side of bacon. Yumm! After breakfast, we got ready for a mini adventure around the camp to explore different habitats. We travelled to a nearby meadow and spent quite a bit of our time catching bugs with nets and brainstorming ideas for individual projects.

In the late morning after a quick snack and an epic round of Uno, we went on to complete the group project. We each were given a role to play in the project in order to survey the stream. Here’s what the authors did. Sierra was the Data Director and kept tally of all the data the others collected. Alfredo checked the water quality with a sonde and pH tablets. Lucia checked the canopy cover with a nifty app and checked the algae density on several rocks. Once we accomplished our goal of finishing the group project we then grabbed lunch and restarted the Uno match of the century and continued to play well into the afternoon. 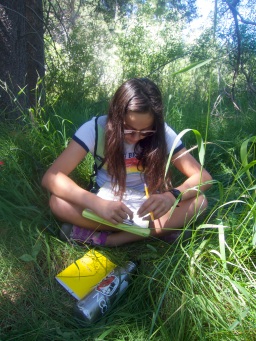 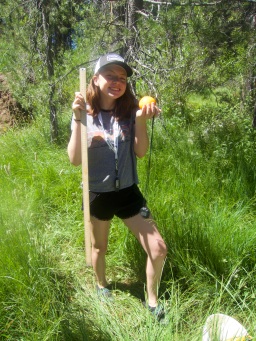 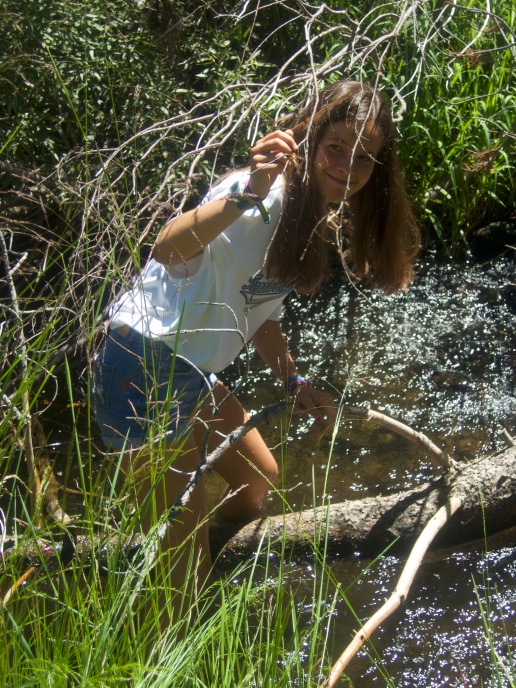 Mid afternoon, we gathered in the classroom to develop our ideas for our personal projects some more. Once we had an idea going on in our heads we talked with the amazing counselors to help bring our ideas and questions to life. Some of us even got a head start and began executing our projects!

The authors each had their own project in mind and set out to make their ideas a reality:

SK; “I went out into the nearby meadow we visited earlier in the day and collected some scat to bring back in order to identify it and find out what its diet was. I am also going to look at a carcass that we had previously found in order to also identify the mysterious organism and hopefully find out how it died.

LM: “I went out into the forest to find 3 trees of the same type but with different health problems: Unhealthy, healthy and dead. I am going to look what type of flying insects live in each tree and why do they choose to live there.”

While some of us were out and about working on our projects, those of us back at base camp were greeted with an interesting visitor, a Mountain Garter snake! Lucia managed to catch the snake but was greeted with a stinky surprise upon the capture of our new friend, Noodle. Noodle was scared and stressed for the most part but we were able to catch him and how he acts. After a while of observing the interesting snake, we released Noodle back into the wild.

As the temperature began to drop, one of the other groups camping at Sagehen with us were kind enough to show us just exactly what they were doing in the area. They were researches from UC Berkley who specialized in fire ecology and trees. The people showed us how to tell how old a tree was by coring it and how well the tree’s health was over the years. Then they sent us off into groups to core different trees. Team Hippogriff got the chance to core a lodge pole pine and we were even able to keep the stuff we pulled out from the tree! We were able to tell from the rings in the core sample that the tree was much older than it looked and had a rough life early on with slow growth about 30 years ago (probably because it once competed with other trees that were nearby).

After the talk with the wonderful fire ecologists, we went on a night hike in search of herps (amphibians and reptiles!). During our night hike we were able to see many things including beetles and millipedes. We even saw some frogs hanging out around the ponds scattered around the trail. The most amazing thing we saw however was the Rubber Boa. Noah was so excited to see this snake; it was his main goal at this camp to see this elusive sublime snake. We all got the chance to hold the snake, which we had named Spaghette.

Quote from the discovery:

Noah: “Can I go past infinity?”

Can’t wait to see what we find tomorrow!